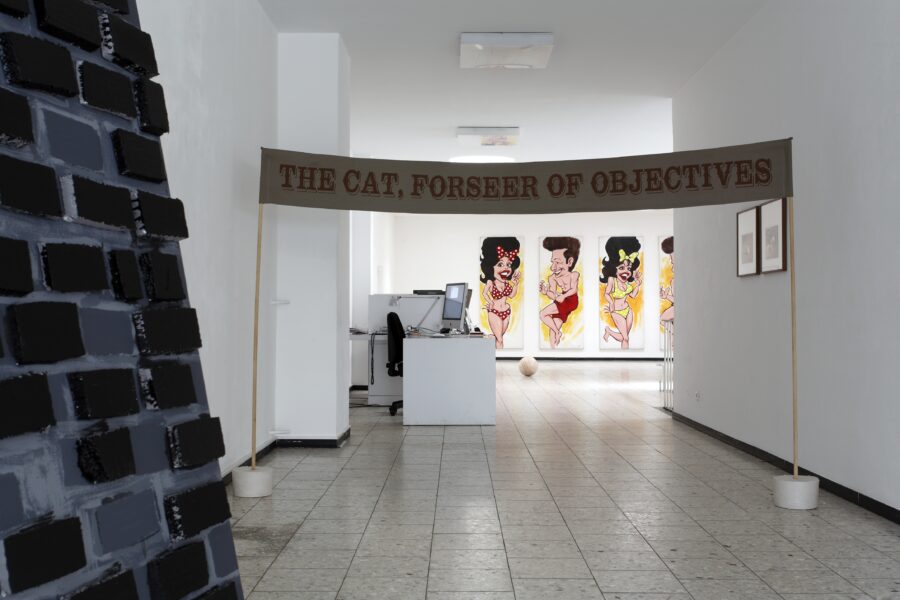 And then you come with your sticks –CN
Question: What connects a broom and a bottle of rum?
Answer: a drunk janitor

To husband is to join one thing to another, in a process which changes the meaning of both things. As with the Facehole at the county fair, where you place your face in the cut-out hole of a picture and thereby become part of that picture, Los Angeles artists Kathryn Andrews and Stephanie Taylor approach the structure of the two-person show--an event with inherent disconnections--as an affair to ask how do we make sense of what is seemingly incongruous? Andrews and Taylor work to make connections between artworks in differing ways, husbanding one thing to another, anything to essentially any other. Their collaborative effort has generated mostly individual works including sculpture, painting and photography.
Andrews often bases her connections in the visual world--how to connect a green graphic with a red rug, simply paint a stick red and green and place it near the graphic and the rug. CN: "And then you come with your sticks." Andrews examines material and motif in order to web a world of visual husbandry--and no detail is too slight for her humorously fine-toothed investigations. Her methods, which explore the possibility and impossibility of coupling, have generated a range of objects including rented paintings from a Hollywood prop house ["Frame (Frankie and Annette)"], a commissioned double of another prop suggesting a brick wall ["Bricks"], hand-painted, one-off silk-screens, and a partial recreation of one of Taylor's works ["Addendum"].

Taylor, on the other hand, uses rhyme to generate each individual work. Her working method involves breaking down found text into individual syllables and reforming the syllables into elaborate and absurd narratives. In addition, Taylor's works rhyme with the materials with which they are made. For instance, "Broom and Rum", a cast aluminum sculpture, sounds like "oom and um," (and is made of aluminum). Her contributions also include "Show Sow and Calf", a set of photographs (its sounds: o-o-af/photograph), and a drawing, "Snoring" (with the sounds "or-ing"/drawing), which attempts to unite the two using narrative. Question: what connects a broom and a bottle of rum? Answer: a drunk janitor. Taylor uses narratives such as this one about a drunk-janitor-cowboy to connect works which otherwise are not connected. Any two objects are enough to make some kind of story--but, in Taylor's case, it's the objects (and their sounds), which come first and the story, which follows.