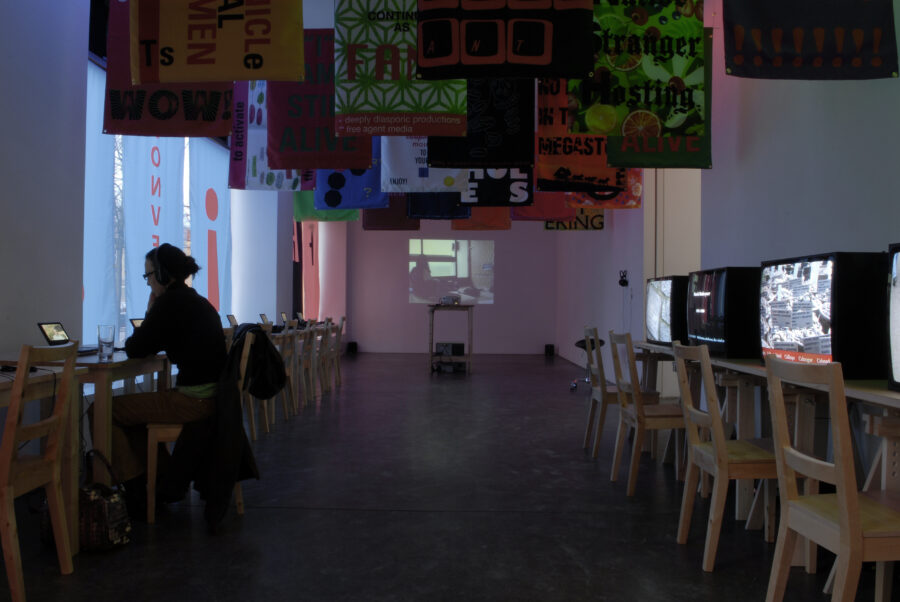 From 2 March – 7 April 2007 Galerie Christian Nagel presents Renée Green, United Space of Conditioned Becoming 2. Since 1994, Green has been developing an endeavor called Free Agent Media (FAM). FAM has provided a framework for durational projects, which often include resonant intersections with the work and thoughts of others from around the world. The works produced include publications, films, videos, websites, audio recordings, events, concerts, conversations, excursions, film and lecture series, objects, architecture, and installations. In this exhibition works from these productions are united for the first time and interwoven with a new installation. Green’s work explores multiple circuits of relation and exchange over time, the gaps and shifts in what survives in public and private memories, as well as what has been imagined and invented. She also focuses on the effects of a changing transcultural sphere on what can now be made and thought.

2007 marks Free Agent Media’s 13th Anniversary. To celebrate it, United Space of Conditioned Becoming showcases and re-presents excerpts from projects produced since 2000, when Green last exhibited in New York. What can occur and be received in different ways, in different locations, and at different times is an element being tested in United Space of Conditioned Becoming 1(New York) and 2 (Berlin). These projects include Returns: Tracing Lusitania (2000-2001), Platform (2000-2001), Wavelinks (1999-2002), Code: Survey (2003-2006), Elsewhere ? Here (2002, 2004), Sound Forest Folly (2004), Relay (2005), Index From Oblivion: Climates + Paradoxes (2005), Unité d’habitation (2006). As Lisbon, Angola, Korea, Los Angeles, Barcelona, Vienna, Berlin, California, Imaginary Places, Paris, Firminy, Tilburg, Kassel, and New York are some of the locations these projects conjure, the role of movement and the necessity to move are crucial aspects of the works presented. What does it means to be a foreigner? A stranger, illegal and yet a resident? A legal resident, and yet a stranger? Can one be in exile at “home”? What can living exilically mean? The projects themselves index conditions to inhabit the world, as well as the artist’s attempted inhabitation and passage through it.

These “Global Life-World Conditions” of movement and exchange are now faced by an increasing number of people. FAM continues to engage in a range of productions that explore passages of time, various lacuna, diverse locations and forms of living that take place within these. These also include forms of translation, as well as “difficult”works, meaning complex, open-ended durational and niche-defying productions.

Questions recurrently asked by Green and by many others included in the productions presented here are, How is it possible to live and create today? What can this mean now? Is cosmopolitanism a compelling and accurate way to describe these conditions and enactments? How is it possible to convey what is lived and what is imagined?

These questions are formulated, and in some instances enacted, in the works presented in the exhibition. One of Green’s interests is to call attention to the pace of perceiving, allowing the possibility to slow down, to reflect on what has been created and encountered in local and transnational settings. Green’s approach is an accretive and layered one. Layers of images, of sounds, of space, of colors, of voices, of materials, of technology, of thoughts, of feelings constitute United Space of Conditioned Becoming.

United Space of Conditioned Becoming 1 opened in New York at Participant Inc on 25 February and included a concert by Burnt Sugar, The Arkestra Chamber, and continues until 8 April.