Hans-Jörg Mayer  THIS IS NOT A LOVE SONG 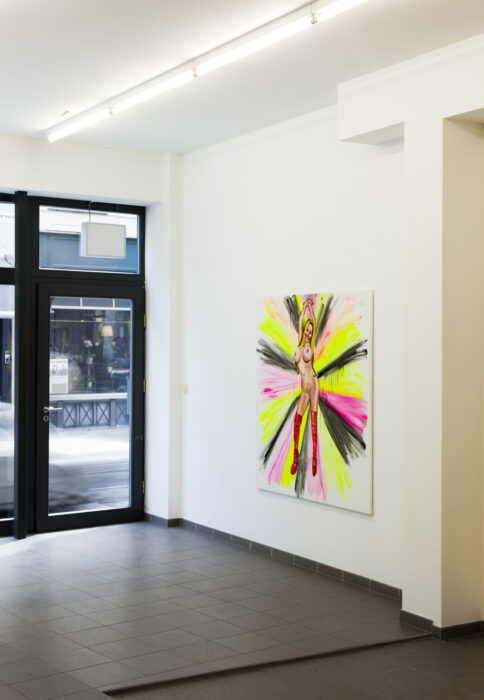 All works in this exhibition by Hans-Jörg Mayer are titled after songs by the band Rammstein. All works except one on paper that is, carrying the words THIS IS NOT A LOVE SONG, and giving the show its title. Like the others it refers to a song of a band, in this case PIL (Public Image Ltd.), founded in 1983 by former Sex Pistols singer Jonny Rotten and broken up in 1992. The post-punk era of the 80s was extremely stylish, the scene was cool, and a ‘club’
was not a discotheque. Talking Heads, Tom Tom Club, Joy Division, DAF and also PIL, with the above-mentioned hit song, were playing.

This was the elitist West. Rammstein, founded in 1994, originate from the ‘Neue Bundesländer’, the eastern part of Germany, reunited with the West in 1989. Rammstein do not signify coolness but crassness. The slightly disturbing issue here is not the heavy contents of their songs — they are provocative but strongly moralistic — the issue rather is their form: linguistic Naziisms and the macho touch of claiming: We have no fear to speak it loud! It is neither the directness of Brechtian materialism, nor The Threepenny Opera, but pretentious kitsch, resembling a Siegfried setup on New York’s Metropolitan Opera (the Americans, as we know, love Wagner and Rammstein). Maybe one best approaches the phenomena Rammstein with the fierce assumption of Walter Benjamin that politics should
not be aestheticized, but art should be politicized. Rammstein clearly want to be political — their art is full of statements. And this goes well with the great turn. All of a sudden the wall fell and with it postmodernism. All of a sudden it was not Heiner Müller’s Description of a Picture (Bildbeschreibung) anymore that was found most interesting, but The Construction Site (Der Bau). Generations of productive structuralist scepticism were wiped away somehow. A big loss. If one beamed Rammstein back into the 80s, aesthetically they would appear somewhere between SPK-pathos and the spectacles of La Fura dels Baus.

Why is Mayer interested in this? Probably exactly because he feels this friction or gap. PIL has as little to do with Rammstein as Heiner Goebble’s (The Man in the Elevator) has to do with the rough-and-ready political slapstick of Frank Castorf’s Berliner Volksbühne. THIS IS NOT A LOVE SONG. But what is it then? — one could still ask. There are things that heavily need communication but which make communication impossible. “Memory, future, glamour. Birth, sex, death, Rammstein.” Mayer appears to mix everything, references cannot be more heterogeneous: Micky Rourke, Bin Laden, Lars von Trier, Richard Prince, pop- and porn starlets plus the Nazi girl from the movie Die Kriegerin (The Warrior). His art follows its own timeline and can therefore let contrarieties cross each other. “No wanking with references but playing with style” (Hans-Jörg Mayer). Mayer’s images are surfaces from media and popular culture; otherwise they would be hard to bear. Everything is on the surface. Everything lasts. Of his paintings, the most drastic ones are not painted but written. Fluorescent neon colours on glaring white backgrounds. They are reminiscent of post-punk graffiti, scripture-images that escape the picture-flood to create a vacuum comparable to a sudden loss of sound.

“I’ve seen things you people wouldn’t believe. Attack ships on fire off the shoulder of Orion. I watched c-beams glitter in the dark near Tannhäuser Gate.”
Blade Runner

THIS IS NOT A LOVE SONG