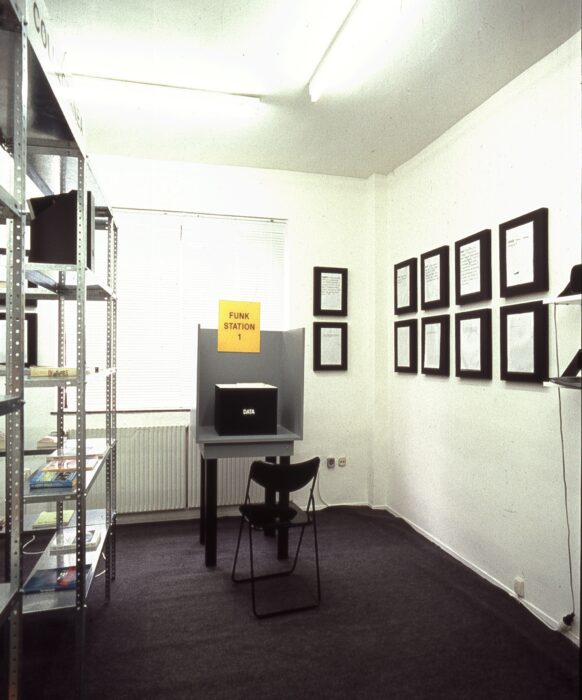 The movement back and forth between the U.S. and Germany of certain cultural icons, with a focus on images and products from black american popular culture, specifically music because of its fluidity, is a recurring source for celebration, dislike, attempted usurpation enthusiastic manipulation and debate. The primary time span addressed is between the 1960s (the german "discovery" of the blues) and the present (rap videos), with some older historical references. Two iconical figures, Angela Davis and Theodor Adorno, provide points for rumination and function in this exhibition as a sort of axis for the mixture that can occur in the cultural realm when german philosophical traditions are intermingled with perspectives shaped by specific historical periods in the U.S. and in Germany.

Angela Davis studied philosophy in Frankfurt with Adorno in the 1960s. While in Germany, she saw a photo of the black Panthers in Oakland, California. Because of the strength of the image, the force implied by raised fists, berets and black leather jackets, combined with their political program, she returned to the U.S. to become a political activist.
Later, she was made an icon for the Communist Party, and posters of her were produced and distributed internationally.

Adorno was in exile in California before returning to Germany in the 1960s. While in the U.S. He expressed views about jazz, which are often mentioned in regard to his writings about culture.

¨Adorno¨ and ¨Angela¨ provide symbolic locations for the myraid cultural mixtures which can occur as a result of the various migrations people make and throw into question any static notions of nationality and identity.

By observing the flow of cultural products imported and exported between the U.S. and Germany one can find a way to examine where these cultural mixtures most visibly occur.

A key aspect of this work involves the investigation into the evolution of a German music critic, the subject chosen being Diedrich Diedrichsen. His history embodies the contradictions which occur within the import/export cultural economy, and which are described in a idiosyncratic way. Renée Green followed this migration of hip hop culture and the icons which are used in it from the 1960s black nationalism which include images of Angela Davis. The methodology is adapted from anthropology and ethnology. Diedrichsen's role is that of an informant, Renée Green's role is tat of a participant-observer. She has been following Diedrichsen around in his various habitats, his encounters in New York and those in Germany, videotaping him in various situations and conducting interviews with him. In attempt to contextualize rap music, Renée Green also interviewed various New Yorkers about their relationship to this pervasive music (which began in the Bronx and is now duplicated in Germany) as well as Germans.