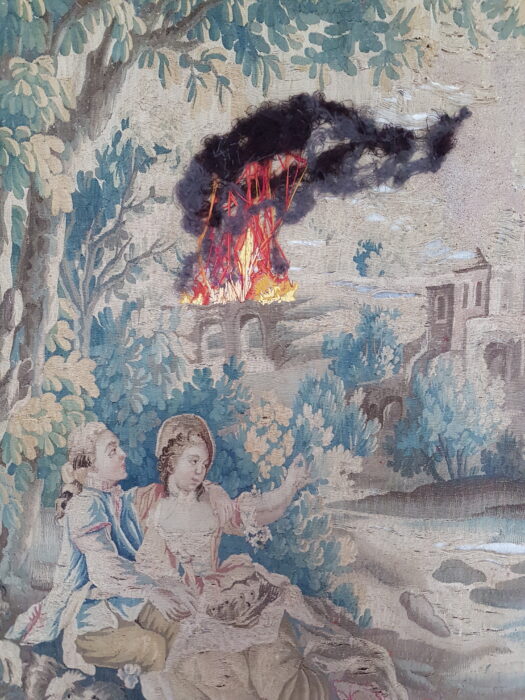 Arnaud Cohen (b.1968) lives and works between Paris and his studio river island in the center of France. Cohen explores the relationship between history and fiction, ancient and postmodern mythologies. His protean art draws from Situationist traditions to unpack frames of allegory, hyper-reality and globalization. His appropriationism extends across social and aesthetic forms from Greek sculpture to reality tv.

In this Ich freute mich auf einen letzten Tanz show, Cohen addresses the topic of a world turning xenophobic again, with the western elite pretending nothing is going wrong. Winter Over Europe, a modified XVIIIth century Aubusson tapestry symbolizes this growing desire of individuals and groups to be separated from each other. In the center of the room are Cohen's Colosses. These sculptures are trans historical and transgender collages of western artistic incarnations of power, grafted to today's German life size shop mannequins. Seated on some conceptual round iron sofa, they look as if they are expecting to be invited to a last dance.

In the courtyard, the fountain Old Voltaire is the new source seems to demonstrate how desperately ineffective is Europe's Enlightenment philosophy in today's entertainment era.

Cohen's work has been exhibited and performed extensively around the globe. 2018 - 2016 presentations include the exhibition of his fictional work the ASFI Foundation by the Tate on the occasion of the Virginia Woolf show, Venice Biennale 57 Salon Suisse, a solo show at Berlin’s Rosa-Luxemburg-Platz Kunstverein, first edition of Bienalsur South America Biennale at Untref Museum Buenos Aires, Do Disturb at Palais de Tokyo Paris and Dark'art Biennale at Raw Material.

His next presentations in 2018 include Something Else Cairo Biennale (starting Nov 1st) and Shoah Memorial Paris (starting Dec 12).