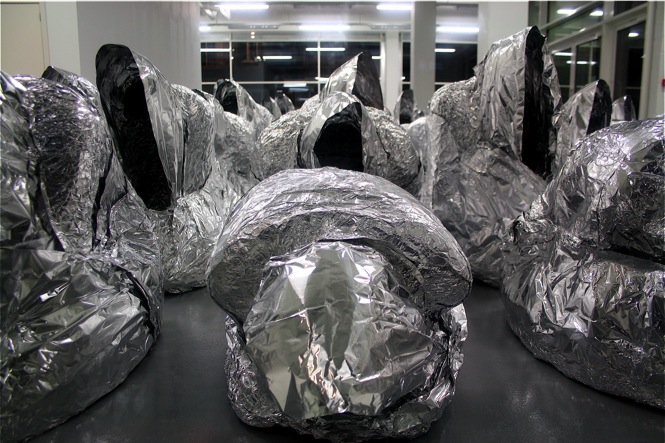 We are delighted to present the most capacious version of Kader Attia’s well-known installation “Ghost” to our Belgian audience.

The expansive work engages the entire space of Galerie Christian Nagel, filling the room with lightweight aluminium forms cast from the bodies of kneeling women. The work evidently concerns itself with the virulent question of individual identity within dominant cultural and religious groups. Central to the artist’s thinking are the two poles between which human existence has always vacillated: hope and negativity, drive for life and the desire for death. This duality seems to be mirrored especially in the role of Mary within the Catholic Church, and in the lives of Muslim women – traditionally modelled after the ideal of Fatima, the fifth and youngest daughter of the prophet Mohammed. It is they, who are so honoured and protected, that they ultimately lose every freedom. Thus, the woman with the veiled head becomes for Attia a panreligious icon representing indissoluble contradictions.
This ambiguity takes compelling form in the differing front and back views of the installation. A quotation from Lao Tse, which the artist cites in relation to this, basically asserts that mankind creates things, but that emptiness creates their meaning. In this respect, the compact, shining backs signify ‘Form’, while the deep hollows of the front view signify ‘Sense’. The fact that “Ghost“ can only be read as a unity of form and the empty hoods without expression, personhood or spirit which it encompasses have an equivalent in the extreme fragility of the single body – made of metal, yet so flimsy that one could easily crush it in one stroke.
Beyond all narrative moments, Kader Attia’s installation exhibits a profound sense of space. His interest in room-encompassing gestures such as rows, axial orientation and symmetry stems directly from his analytical view of the conditioning of the subject through external structures and orders. At the same time, in borrowing the principal of seriality, these gestures reflect upon the institutionalized conventions of the Minimal.

Attia, born in Paris in 1970 into an Algerian family, is an artist of bilateral heritage who reflects on canonized Western positions from a cross-cultural perspective. His first solo exhibition took place in 1996 in the Democratic Republic of Congo. From then on he has regularly exhibited in France, in the Palais de Tokyo, the Lyon Contemporary Art Museum and the Centre George Pompidou. He gained international recognition by participating at the Venice Biennale in 2003, the Art Basel Miami Beach in 2004 and the Lyon Biennale in 2005 for which he created one of his most known installations “Flying Rats“. Attia’s previous work includes “La Piste d'atterrissage“ (“The Landing Strip“), which can be regarded as a culmination of his work with Algerian transsexuals in French society.
Attia’s recent solo exhibitions took place in institutions in France such as the Centre de Création Contemporaine de Tours, the Musée d'Art Contemporain de Lyon as well as the le Magasin, Grenoble, in Israel at the Haifa Museum of Art and in the USA at the ICA Boston. In 2010 he took part in the Biennales of Busan/Korea and Sydney/Australia, in the opening exhibition of the Arab Museum of Modern Art, Doha/Qatar as well as in various exhibitions at the Haus der Kunst in Munich/Germany, Steirischer Herbst in Graz/Austria, Kunsthalle Gwangju and City Museum in Gwangju/Korea and ART UNLIMITED in Basel/Switzerland .

Kader Attia lives and works in Paris and Berlin.