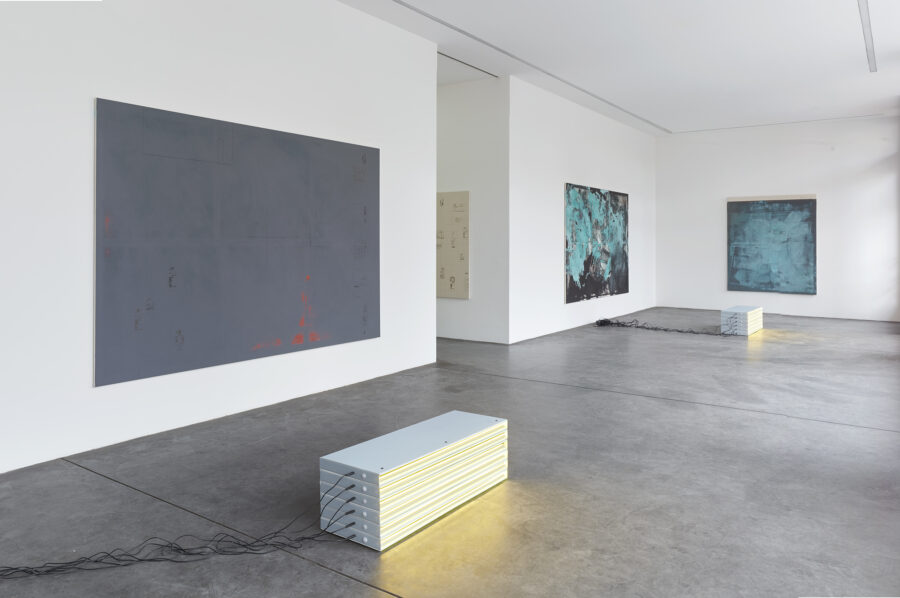 Egan Frantz belongs to the intellectually and aesthetically most challenging artists of his generation. His principally conceptual aproach follows a multilayered visual, tonal and theoretical intuition. The young New York artist and musician combines a way of thinking, that is nurtured by the protagonists of contemporary experimental theory, with a tonally breached practice of seeing and acting-out, that can get very physical. Thinking machine, sound machine, body machine, image machine,... Kraftwerk. Frantz incorporates daily actions into his works as their signature (receipts for his own personal consumption, laundry slips that contain records of stains in personal clothing). This, not least, can be seen as an expression of the artistic 'impossibility to say I/Me', when at the same time this is exactly the imperative.

April 24, 2016, 16:52
Sorry Saskia change of plans!
Let's keep the recit / receipt design for the front of the card but title the exhibition itself: Dark Tongues, Ghostly Apparations and Tax Avoidance.
Best
Egan

récit
When I was building the machines, the lasers, that I wanted to make works with… I was very impressed by Tristan Tzara’s late work, The Secret of François Villon. The Tzara of the Dada Manifesto had become researcher and literary scholar taking to task the project of uncovering the anagrammatic secrets of the fifteenth-century poet. I was already aware and wonderfully convinced by Quentin Meillasoux’s recent,The Number and the Siren: A Decipherment of Mallarme’s Coup de Dés, which gave us a new, strange and improbable theory cum proof that “a unique Number that cannot be another” is delivered to us by a secret code hidden in the poem of 1898. So asking around I learned of one more project… Ferdinand de Saussure’s secret.. his ninety-nine notebooks devoted to elucidating the principles of Indo-European “phonic furor,” insisting that the entire text of the Homeric poems rested on a secret law of an absolutely fixed number that can be discerned in its “anagrammatic polyphones.”
Having “signed” works of mine by laser for the past few years with various receipts, from the dry-cleaners to the movies, sometimes haunted by the image of “Low Ghost,” the obvious and multiple affinities with Dada to what I have been doing was something I was conscious of. I did not know, however, of Tzara’s Villon, which is to me in retrospect a happy chance because it was this kind of intuitive leap that needed to jump out of the bag to get to the paintings I wanted to make but didn’t how to yet.
As for the paintings once I had decided that the compositions would be organized around the simple phonemic refrain, “récit / receipt” the question arose as to what the character of this word might look like. So I began painting… which is an increasingly mysterious decision to me which I’ve somehow justified by using urine to thin my paints because after all, “Pee is for Painting.”
The paintings I came up with are very strange to me. They “carry their own fire” as Franz Kline said of his paintings. I say this because some days they look at me as though very friendly and other days they look back absolutely miserable, which makes me feel like Victor Frankenstein having sought to create life and being horrified with my creation. This is the poetry of the circumstance; which draws from the world the materials of an image uniquely faithful to the poets encounter with it.
receipt

March 25, 2016
Hi Christian and Saskia,
....Just a quick note on progress and developments here (see attached images). I've found that a combination of urine and vinegar makes for interesting color variations in the reaction with copper. That reaction that develops is distanced from traditional conceptions of abstraction given that it registered on top of the laser plotted grid as though it is being measured in some pseudo-scientific way. Finally, I've found that lasering the receipts on top of the copper / urine / vinegar mix produces a more profound line, revealing the pure copper once again.
Perhaps you are familiar with the idiom "full of piss and vinegar."?
I often return word play.. somehow always at the center of my working method. I think this works very well here. A literal translation from language material to the material itself.
I will spend the next two weeks painting the works more or less full until the 11 works feel right. And in this time of economic austerity... it helps that I have friends full of piss who are giving it away for free!
Speak soon. Best, Egan

English [edit]
Noun [edit] piss and vinegar ( uncountable)
1. (US, idiomatic) Exuberance or enthusiasm, especially to an excessive degree; bravado; youthful energy. [from mid-20th c.] [quotations ▲]
1940, John Steinbeck, The Grapes of Wrath, Viking, p. 248: "I know what's a matter. Young fella, all full a piss an' vinegar. Wanta be a hell of a
guy all the time."

January 29, 2016
Dark Tounges, Ghostly Apparitions, and Cheaper Language
...In many of the world's languages, onomatopoeia-like words are used to describe phenomena apart from the purely auditive. Japanese often utilizes such words to describe feelings or figurative expressions about objects or concepts. For instance, Japanese barabara is used to reflect an object's state of disarray or separation, and shiiin is the onomatopoetic form of absolute silence. Between 1906 and 1909 Ferdinand de Saussure, devoted ninety-nine notebooks to elucidating the principles of Indo-European “phonic furor,” insisting that the entire text of the Homeric poems rested on a secret law of an absolutely fixed number that can be discerned in its “anagrammatic polyphones.” Despite promises in 1959 it was only in 1991 that Tristan Tzara’s late work of uncovering the anagrammatic secrets in François Villon’s poetry became available to the public in The Secret of Villon. Most recently Quentin Meillasoux’s,The Number and the Siren: A Decipherment of Mallarme’s Coup de Dés, gave us a new, strange and improbable theory cum proof that claims “a unique Number that cannot be another” is delivered to us by a secret code hidden in the Great poem of 1898. Of what use is a secret? Of what use are poems within poems, words within words, and of what use is liberty when bound up by system ‘if not to introduce some play into our works?’

Grand in scale, the Anagram Paintings are based on a twofold investigation of the metric system and Stephan Mallarmé’s secret metric or unique number. They are marked by edge to edge fields of data, laser-singed across their surfaces and are complimented by colors, “colors that become,” in the artists words. The geometrically charred canvases, each previously infused with chemical indicator fluids, develop into their own by chemical reaction to a “varnish” of numbered pH calibration fluids...

...If modernity triumphed at the turn of the century and we did not know it, and if there is a metric behind all artistic license, then like a hummingbird’s wings, the artistic project of investigation and innovation in the 21st-century will continue appear to rest between materiality, invisibility, and Nothingness...

1 Heller-Roazen, Daniel. Dark Tounges: The Art of Rogues and Riddlers
2 Meillassoux, Quentin. The Number and the Siren: A Decipherment of Mallarme’s Coup de Des