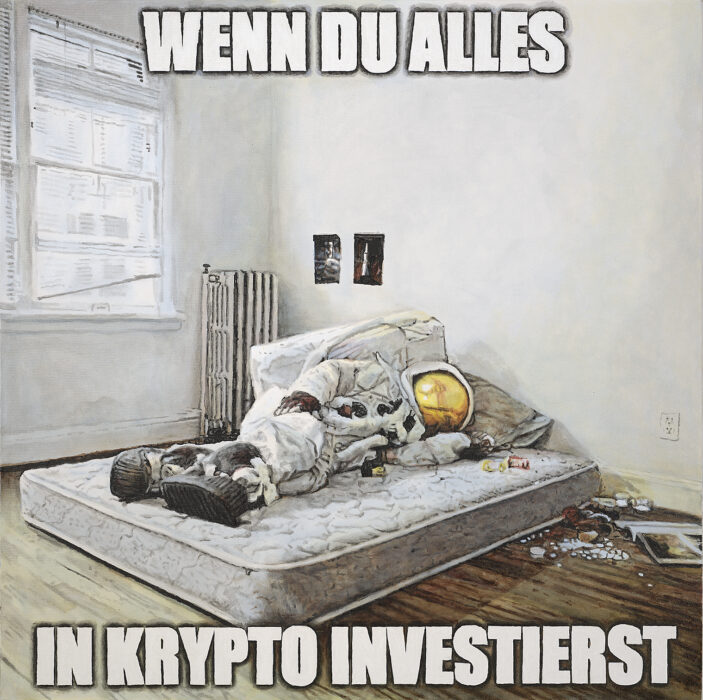 If a joke has to be explained, it is no longer funny. Unfortunately, Crypto Rich is filled with jokes that have to be explained. Some jokes are memes directly taken from Instagram or Twitter. Astronaut (1), Bitcoin Princess (2), Horse (3), and Tron (4) are all paintings of directly copied memes with no alteration. The people interested in cryptocurrencies do not need to have the jokes explained. The memes operate with their own visual language. The footnote explanations of the paintings delineate a difference in cultural literacy between the fields of art and the technology.

Appropriation also highlights an aggressive address towards the technology audience. The paintings recontexualize the memes in an art environment, where conventional sexism and consumerism are examined and criticized. The art context alienates the visual conventions and stereotypes displayed in the memes. In Bitcoin Princess, for example, why is bitcoin feminized? More aggressive address includes targeting technology people themselves as the butt of jokes. This is most evident in the paintings where gestural words are added onto screenshots, such as Vitalik Jesus (5), Talking Heads (6), and Winklevii (7). Vitalik Jesus makes fun of the desperate greed that most cryptocurrency "investors" exhibit. The painting makes explicit the implicit message in the original meme. Talking Heads infantalizes women in venture capital by labeling them "girls". The text on Winklevii reads "I want a threesome", and makes the Winklevoss twins, and by extension any male tech entrepreneur, an object of sexual desire. There is also the desire for economic gain via the institution of marriage when the painting reads, "please marry me“.

The desire for rich bitcoin investors is part of an accommodating address towards the technology audience. The desire for the bodies of investors is extended to a desire for bitcoin. On vogue.com 8, the text reads, "BITCOIN: I want it, I don’t get it." An abject acknowledgement of ignorance and desire elevates the field of technology over the field of art. On the same painting, cultural depictions of bitcoin highlight bitcoin's function as a symbol of luxury rather than its purported use as a new trustless method of exchanging value.

__________________
1) Astronaut is a painting of an astronaut on a bare mattress in a room with no furniture and some trash and pills on the floor with the caption in meme font saying “Wenn Du Alles in Krypto Investierst.” (Translation: When you invest everything in crypto.) When the price of bitcoin spiked in December 2017, the price of bitcoin and alternative cryptocurrencies were said to be “going to the moon". After selling the bed sheets in order to invest in cryptocurrency, the hopeful astronaut is waiting to "go to the moon".

3) In Horse, the words “Whitepaper, Production, Actual Product Release, Blockchain ICO” label parts of a horse that is drawn in a progressively crude fashion. According to Wikipedia, "white papers are long-form content designed to promote the products or services from a specific company". Satoshi Nakamoto released the Bitcoin white paper in 2009 and cryptocurrencies since have been releasing their own white papers. These white papers often claim that the cryptocurrency will solve a large problem. The Blockchain ICO stands for Initial Coin Offering which is a derivation of Initial Public Offering. ICO’s have raised hundreds of millions of dollars for companies that started their own blockchains. Oftentimes what the white paper promises, the alt-coin fails to deliver hence the many lawsuits filed by people who bought "tokens" during ICOs.

5) Vitalik Jesus. This painting is of a meme made by a reddit user with the handle earthquakequestion. It shows Vitalik's face photoshopped onto Jesus presenting a red Lamborghini to the viewer. The text reads "BUY CRYPTO GET LAMBO" in red gestural letters and "Dear God, please make me rich" in a script font. Vitalik Buterin is the 24-year-old founder of Ethereum, an alt-coin with the second largest market capitalization at $28.98B, as of September 4, 2018. According to Jeff Kauflin writing for forbes.com, Vitalik’s net worth is estimated to be between $100M and $200M.

6) Talking Heads. The source material is a screen shot of fortune.com's series Balancing the Ledger. Video of Jen Wieczner interviewing Meltem Demirors, the founder of Athena Capital, is over-written with the words, "WHITE GIRLS WANT IN NOW" because a feminist critique can't work without an anti-capitalist and anti-racist critique. The title of the article is, "How Women Could Send Bitcoin to the Moon". This begs the question, "Which women?"

7) Winklevii. The Winklevoss twins famously sued Mark Zuckerberg for stealing their idea for a social network. According to Stephen Little writing for the independent.co.uk, the twins started investing their money in bitcoin in 2012 resulting in huge profits in late 2017. The text reads, "Dear Winklevoss twins, please marry me then spit-roast me." Spit roast is a verb that describes a sexual position where one man is performing intercourse on a passive person anally or vaginally while another man is receiving oral sex from the same passive person. The position makes the passive person look like a roasted animal rotating on a stick.

8) vogue.com. On January 1, 2018 Vogue.com posted an article titled, "The Secret to Keeping New Year's Resolutions Might Be in Your Wardrobe”, by Lynn Yaeger. The purchase of commodities was purported to help the reader keep resolutions. For example, "Read more" was paired with a Moschino newspaper-print blouse, $600. The last resolution "Save Money," was attached to Maison Margiela Future Money high-top grip sneakers, $965; Tiffany & Co. piggy bank, $2000; Bitcoin, $15,238; and a Gucci print leather zip-around wallet, $830, gucci.com.