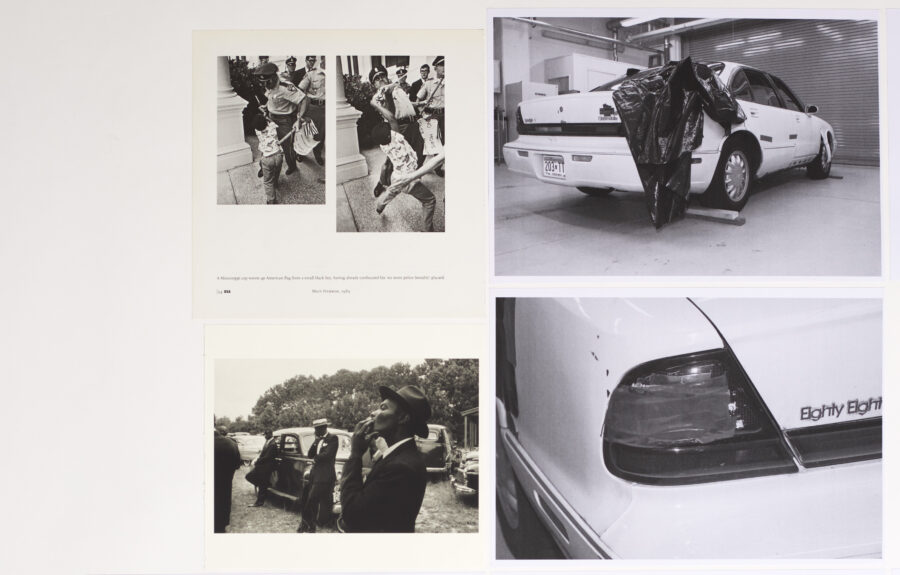 adjacency:
the reparative work of transforming
proximity into accountability;
the labor of positioning oneself
in relation to another in ways
that revalue and redress
complex histories of dispossession.
- Tina M. Campt

DAVID JOSELIT'S thought-provoking piece "Material Witness: Visual Evidence and the Case of Eric Garner" [Artforum, February 2015) raises the question: Is it, after all, a failure of representation when the spectacle of black strife animates one crisis or another? Or is that rather the promise of representation? The Staren Island case is described in this short essay as "tragic," a dra­matic term that reveals a suspiciously cathartic strain in the frequent summonsing of black negativity to appear before problem after problem, including, apparently, the state of post-Conceptual art. Given the world they live in, post-Conceptual artists ought to have already considered the "ideological promises of representation." Any critical investigation that calls for the testimony of objects should by now already account for what Fred Moten has described as the "commodity who speaks"­she who finds herself in the hold, freighted within rep­resentation. When I began reading this piece, I was reminded of a recent daylong symposium at a museum where the same legal case was called upon to situate new questions around Minimalist dance, Samuel Beckett, and so on. That event missed several points, whereas Joselit's essay productively brings us to William Pope.L's work, the relevance of which is convincing. While Pope.L's work [Eating the Wall Street Journal, 1991-2000) is instructive, his act of self-harm appears here to embody the convention of negativity and does feel something like abjection; using Obama-masked repre­sentatives [in a performance of the work staged at New York's New Museum in 2010) elevates the cruel theat­ricality of the gesture. In all cases, the body called upon to appear on the side of blackness is a damaged body. Meanwhile, whiteness, as Moten and Stefano Harney describe it, contains within it a refusal of the knowledge that toxic representation is harmful to all who consume it. The question of whiteness may also be of interest to today's post-Conceptualists.

Malik Gaines's thoughtful response to my essay "Material Witness: Visual Evidence and the Case of Eric Garner," as weil as criticism expressed elsewhere by William Pope.L, reminds me that choosing an example with which to make a point is ultimately a form of representation, and like all acts of exempli-fication it can slide into stereotype or ethnic profiling. Since my essay pivots on a challenge to the transparency and presumedefficacy of representation, I agree that my own rhetorical strategies should be open to the same kind of criticism. However, the work of Pope.L's that I cited, Eating the Wall Street Journal, 1991-2000, did not enter my text as a representation of black bodies, abject and self­harming as Gaines suggests, or otherwise. My goal in this piece, as in my other writing, is to analyze artworks alongside other types of discourse, such as the "forensic" evidence of a cell-phone video showing the violence done to Eric Garner, and the philosophical manifesto of Stefano Harney and Fred Moten, The Undercommons: Fugitive Planning and Black Study (2013). None of these distinct statements-each arising from a different genre-is meant to stand for the others: Harney and Moten's notion of an undercommons does not represent Garner and neither does Pope.L's work, but the perfor­mance, the manifesto, and the cell-phone video all articulate positions relevant to a broader questioning of how representation is riven with opacities, prejudices, and power plays. I think the interesting thing to note here is how ingrained our assumptions have become that a work of art merely illustrates something eise (i.e., racism or politics). On the contrary, art is a form of knowledge and experience that may reorganize the world imaginatively rather than picture it as it is.