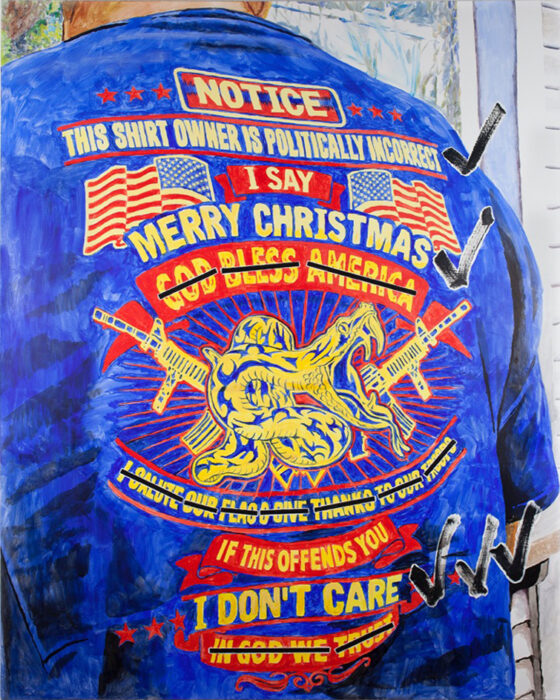 I hate virtue signaling. Everyone does it. It is when a person shows the world they are “good.” Virtue signaling
= presenting a self that is separate from action
= collusion of id and superego. On social media I can pretend to be Ghandi for my superego and my id will enjoy the “likes.”
= fake swastika - “I make a really good swastika” therefore I am a “good white supremacist.”
= advertising
= saying “I can’t believe Trump won” or “I’m going to move to Canada!”
= saying “I love you” when one means “love me.”

When does virtue signaling cross into the virtuous?

I think sin of omission has gradually changed from a sinful failure to perform an action into a sinful failure to speak, to disclose or to reveal. This point of view is related to the paintings. Instagram Like is a painting of the words “Fuck your hugs, I want freedom” written in copperplate cursive over an Instagram phone picture of a post after the Trump election that says, “If you’re a woman, I’ll make sure you get home ok, If you’re tired, me too. If you need a hug, I’ve got an infinite supply. If you need rest, I’ll be with you. All I ask is that you be with me too.”

These paintings talk about my frustration with the Liberal Left in its insistence to judge from afar and not seek to work within progressive politics and real life. My art friends, and myself to a certain extent, post feel-good things on the internet but in real life participate in a dark consumerist practice. What struck me about the Instagram post offering hugs was its failure to list progressive governmental policies and rather relied on individual actions. I think freedom based on individualism will be doomed to fail. And what is more individualistic than Instagram?

I am disappointed in contemporary societies’ inability to provide for our basic needs; rather we collectively have given into our desires. Health Insurance says “I married for health insurance” written in a cursive computer font on an image of myself and my husband at the Los Angeles City Hall in Compton.

Under Capitalist Ideology, the freedom to choose commodities is confused with the freedom to be free from want or harm. This immature idea is brought to the forefront in Chocolate Cake. “Running shoes are worth it” is written in all capital letters with pink bubble letters for “worth it” on an advertisement image of women’s Nike Flyknit running shoes. Kim Ye questioned me, “are they worth it?” or is the idea that the speaker is not “worth it”? The words “Kate Moss can sell anything” is painted handwritten all caps paired with Kate Moss’s iconic topless image from a Calvin Klein campaign.

I painted three Trump paintings Horror Clown, Swastika, and T-shirt. Horror Clown has the words “I didn’t vote” painted in capital letters on an image of Donald Trump on a German newspaper. Swastika says “Trump voters can’t paint,” on an image of a defaced Beastie Boys memorial with swastikas spray painted with the legs of the swastika in all different directions. The “Trump voters part” is painted with meme font and “can’t paint” is painted with the familiar hand painted all capital letters. I believe that people in the United States in general are not familiar with Nazi swastikas and therefore do not know what direction the “legs” point. I think that voice in me that says “Trump voters can’t paint” is a dismissive voice that is an extension of a feeling of alienation, that the Trump voters are stupider than I am or less educated. This liberal scorn is precisely what led to all of the people on the coastal cities of the United States to think that there is “no way Trump will win.” This liberal scorn reveals the Left’s collective failure to really think about those who are left behind by neoliberalism and poverty.

T-shirt says “Notice, this shirt owner is politically incorrect/ I say Merry Christmas / God Bless America / I salute our flag and give thanks to our troops/ If this offend you I don’t care / In God We Trust.” There are check marks next to “politically incorrect” “merry Christmas” and “I don’t care.” I saw this shirt while I was in Julian, California, while buying a pie for Thanksgiving. The white man in front of me was wearing this shirt and I read the things on the shirt and I agreed with most of the things that it said. I thought it would be a nice shirt to wear but then I also thought that my liberal friends would not like it and that the person wearing the shirt was probably a Trump voter. The phrase “If this offends you, I don’t care,” refers to the painting Rape Porn in a way because I am afraid of offending someone. I don’t want to be seen as condoning rape culture or rape itself or the normalization of rape. I agree with many of my liberal friends that rape culture and the normalization of rape and racism is insidious and dangerous and that is part of how Trump got elected. At the same time I think it is important to be able to talk about these issues and distinguish between our actions and our words.

Guilt is a powerful emotion. My therapist asked me why I feel so guilty because I have felt aroused from a young age. For example in the Disney animation Peter Pan, Captain Hook makes Wendy walk the plank and she also gets splashed by mermaids. I remember watching both those scenes and feeling aroused and masturbating. So in theory I don’t have to feel bad because this was how I am wired. This is the message of female sexual empowerment and the logic of S/m. That S/m distinguishes rape play and real rape via the usage of “safe, sane and consensual” or “risk aware consensual kink.” My interest in S/m has been explored in several paintings and drawings of mine.

There are many facts to support this hypothesis namely that http://www.huffingtonpost.com/sorayachemaly/50-facts-rape_b_2019338.html

These are the facts that stand out to me:

Chances that a Native American woman in the U.S. will be raped: 1 in 3 (http://www.nytimes.com/ 2012/05/23/us/native-americans-struggle-with-high-rate-of-rape.html)

Number of rapes reported in the military last year: 16,500 http://www.huffingtonpost.com/sorayachemaly/the-invisible-war_b_1205741.html

Number of women raped per hour in Congo during war: 48 https://www.theguardian.com/world/ 2011/may/12/48-women-raped-hour-congo

I think these facts show that the occurrence of rape is relate to larger occurrences of capitalism, inequality, colonization, imprisonment and war. I also think this is why it I would be so interested in Prison-Industrial-Complex abolition because it is related to the abolition of rape in as much as both are state-sanctioned violence. I claim that rape is state-sanctioned violence because of the evidence of failure of municipalities in prosecuting rape (Houston, Detroit), the increased chance of rape within prisons and jails and the relation between rape and war. Beneficially for myself, antiprison work does not have the potential to be titillating (prickelnd). In order to absolve myself of the sin of omission, I could potentially work for Girls Education and Monitoring Services (http:// www.gems-girls.org/) which is an organization in New York City helping young girls and women ages 12-24 who have been exploited or trafficked. Unfortunately, I found several of their case stories quite arousing. Which I thought was an inappropriate response for a potential volunteer.

Simultaneity is important to the show and the paint layer of the text is congruent with the paint layer of the image, but the shape of the text is overlapping the image within the spacial logic of the painting. The painting process is that I first paint the text in black, this is the voice of the “author” or the “speaker” then I cover the text with a latex mask, then I paint the image and I peel the mask off. In this way there are no places where the image overlaps the text. Paint overlap is a physical space where drying time is part of an overall corporeal and temporal experience whereas simultaneity relates more to being and the sin of omission.

While thinking of the simultaneous existence of someone in their home and someone who is unhoused, I created Candles that smell likeSkid Row. The idea is for someone to ,“bring the smell of someone else’s home into ones own home.” I want to capture the scent of Skid Row in a home decor candle. The environment that some homeless people have to live in smells like pee. Skid Row undeniably smells like human waste. Increasingly, LA city’s response to un-housed people is to criminalize them, police them and sweep their belongings into garbage bins. This so-called “solution” is not working. According to the Los Angeles Homeless Services Authority the population of homeless people in the county increased to a total of 44,359 in 2015.

The packaging reads, “Skid Row is an area of Downtown Los Angeles defined as east of Main Street, South of Third Street, West of Alameda Street, and north of Seventh Street. Candles that smell like Skid Row include notes of castoreum, civette, cumin, asphalt and skatole . Many residents suffer from drug addiction and mental health issues. Please advocate for drug rehabilitation programs and mental health clinics, clean restrooms and showers, and an end to the criminalization of homelessness.”